​If you like reading this blog, be sure to check out our Film Blog, featuring new content from the world of Plastic Films!
Free 30 Minute Consultation
October 6, 2016
Non-Destructive Examination Standard Practice on Polyethylene Pipe Butt Fusion Joints is Published 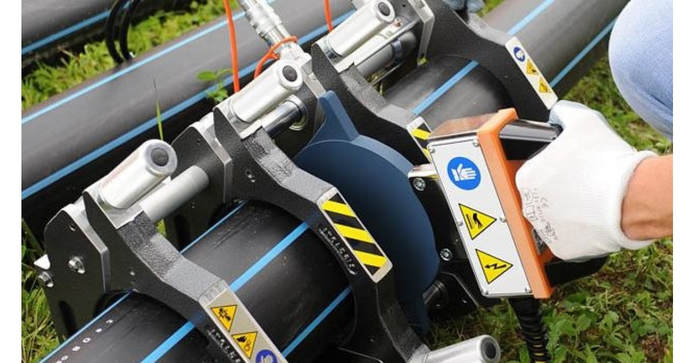 Polyethylene Butt Fusion
The new standard is ASTM E3044/E3044M and is titled “Practice for Ultrasonic Testing of Polyethylene Butt Fusion Joints” and claims that the practice is “a non-destructive way to identify flaws inside the pipe’s butt-fusion joints and to assess the joint’s overall quality”.  The practice sets requirements for relating to the use of sound waves to assess polyethylene joints for several potential problems such as contamination and lack of fusion.  It is also common for manufacturers of non-destructive examination (NDE) equipment to claim that their equipment can identify voids in butt fusion joints.

While I applaud this progress, I have to admit that my position on these NDE technologies is closer to skeptical of their benefits rather than cautiously optimistic.  I am very opposed to broad requirements for the use of these technologies in the polyethylene pipeline construction industry for a very simple reason.  I have never seen a double-blind high replicate scientific study which demonstrates with specificity the capability of specific equipment to detect potential problems in the joints with a high degree of accuracy.  I am more concerned about false detection than I am concerned about lack of sensitivity.  Frankly, I think the polyethylene pipeline industry should expect NDE technologies to meet an even higher goal - that such NDE improves security, safety and durability to a piping construction beyond what is available currently.  Time tested methods of visual inspection already make the failure rate per mile of polyethylene piping installed the lowest in the pipeline industry.  The recent addition of fusion equipment innovations that track the time and pressures applied during fusion should improve this excellent construction quality further.  If my higher goal of improved pipeline integrity is met by NDE, then a practical benefit for NDE can be assessed against the increased costs of installation when using NDE.  In some high risk industries, such as nuclear construction, the costs of a leak in a polyethylene pipe system are so high that any proven practical benefit from NDE will likely provide an acceptable scenario for that industry.  In other industries in which piping materials which compete with polyethylene pipe are allowed to leak when properly installed by consensus standards, it is difficult to understand how new costs in construction could ever be justified.  To the best of my understanding, the NDE technologies currently available are – at best – potentially applied as additional construction workmanship or quality control criteria which falls far short of claims which are commonly made regarding use of such technologies to establish either fitness-for-service or lifetime durability assessments.

To be clear, I am utterly agnostic regarding the various methods used for non-destructive examination for joining of plastics.  I will accept any double-blind NDE study on any technique of detection that shows effectiveness of detection and the relationship between the type of detected anomaly to lifetime durability limitations.  I will not accept studies in which the problematic sample is made by those conducting detection with full knowledge of the details of the problems intentionally introduced into the sample.  Unfortunately, the NDE industry has already heavily advertised their capabilities to plastic pipe system owners based on this type of examination of operator controlled samples.  Such advertising is likely to continue.

I will happily read any information that NDE firms will publish that demonstrates effectiveness of their detection scientifically.  I would also be happy to partner with any NDE firms who would like to undertake a double-blind scientific study of their capabilities in detection.  But I will continue to oppose broad  claims of capability in NDE effectiveness based on the commonly stated principal that “if I see something, it is bad” as a scientific basis for anomaly rejection criteria.
Link to ASTM Announcement﻿﻿
© Copyright Bryan Hauger Consulting, Inc., 2016. All rights reserved.